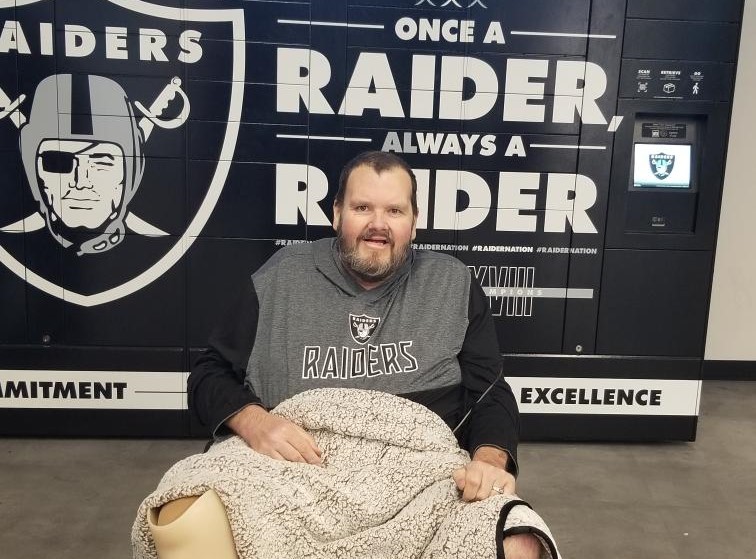 Brad Vannett, 44, of Van Wert has been a Raiders fan since he was 10 years old. “I am still a diehard fan,” Vannett said. “I love my Raiders!”

Vannett was thrilled when his favorite team opened its new stadium in Las Vegas in 2020. It was his dream to visit Allegiant Stadium and see his Raiders play.

He was saving up for a trip to Las Vegas when he was suddenly diagnosed with cancer.

Earlier this year, Vannett went to the hospital for treatment of a wound on his foot that wasn’t healing. His medical team determined that the wound was MRSA, a life-threatening infection that is resistant to antibiotics.

His doctor determined that his foot needed to be amputated in order to save his leg. The amputation was performed successfully and on the day he was going to be discharged from the hospital, doctors informed him that his bones were cancerous. Cancer was also found in his neck and spine.

It was determined that cancer had originated in the bile duct of his liver and had grown undetected and metastasized throughout his body.

He was diagnosed with stage-four cancer and sent to the James Cancer Center at The Ohio State University to seek treatment. After a few weeks, it was determined that treatments were not working and Vannett was sent home with a referral to hospice services.

Earlier this month as a hospice patient with CHP Home Care & Hospice, he completed a wish request to The Angel Foundation to fly to Las Vegas to see his beloved Raiders play at Allegiant Stadium.

The Angel Foundation is a 501c3 nonprofit organization affiliated with CHP that facilitates wishes for terminally ill adults throughout Ohio. It is funded solely through charitable donations, with administration costs covered through the United Way of Van Wert County.

Pontiac Logistics, a nationwide transportation brokerage service based in Defiance, made a generous donation to The Angel Foundation to use toward this wish.

Vannett’s terminal diagnosis meant that the time frame for him to travel was short.

After receiving consent from his doctor, The Angel Foundation made arrangements for Vannett and Jeanne, his wife of 20 years, to travel to Las Vegas from Nov. 11-14 to see the Raiders play the Colts on Sunday, Nov. 13.

A request was also made to the Raiders and tickets for the game were donated.

Help for the Journey

As the time for the Vannett’s trip neared, his health began to decline and Jeanne was worried about getting Brad to the airport and caring for him while navigating the trip.

A hospice nurse was needed to accompany them. 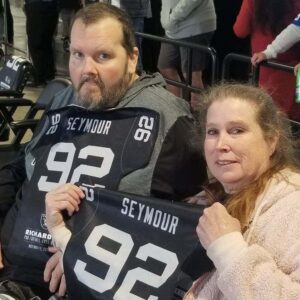 Brad and Jeanne Vannett with gifts from the Raiders at Allegiant Stadium in Las Vegas.

Darcy Cotterman, RN with CHP Home Care & Hospice, agreed to go and stay with her aunt who lives near Las Vegas.

The Angel Foundation also reached out to Greve Chrysler, Dodge, Jeep, Ram of Van Wert, and Mike Butler to arrange a van rental donation for transportation to and from the Detroit airport.

The long day of travel was taxing on Vannett, but he was able to rest on the Saturday before the game in their room at the Luxor Hotel.

“He enjoyed seeing the Vegas lights at night, and the stadium, and the mountains,” Cotterman said. “When he got into the stadium, his face lit up!”

Representatives from the team greeted him at his seat with a gift bag of Raiders swag including a blanket, hat, towel, and more.

Cotterman made sure Vannett took his meds and was as comfortable as possible. About halfway through the game, he began getting sick and was exhausted.

“He felt guilty about needing to leave the game early and he tried to stay for us,” Cotterman said. “But I told him, ‘Brad, I’m here for you. This is your wish.’”

They left the game and made it back to the hotel. The next day, they flew home.

Back in Van Wert, Cotterman made a follow-up nursing visit to Vannett’s home after a couple of days and asked him his thoughts about the trip.

“It was great,” Vannett said. “Next time, we’ll take my neighbor too!”